Barcelona is now five points clear of Real Madrid in LaLiga standings, after a 2-0 win against Leganes at the Camp Nou. 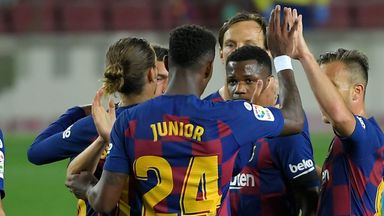 The Catalans were far from their best tonight and they were quite fortunate not to be behind early on.

17yrs old Ansu Fati became the second-youngest player ever to five La Liga goals when he fired home three minutes before the break.

He opened the scoring three minutes from half-time with a composed finish after receiving the ball at the edge of the box.

Antoine Griezmann, who cut a frustrated figure, had a goal disallowed on 64 minutes after VAR determined that Nelson Semedo was offside in the build-up to the Frenchman finding the net.

Messi danced his way through half the Leganes team minutes later – a run which was ended by a foul inside the area from Jonathan Silva. The referee pointed to the spot and the Argentine scorer sent goalkeeper Ivan Cuellar the wrong way to move within a goal of 700 for club and country (629th goal for Barcelona.)

What’s next?
Up next for Barcelona, it’s Sevilla on Friday evening (kick-off 9pm).

Real Madrid plays Valencia on Thursday night, and with a must win mindset to cut the gap back to two points, with nine games to play.