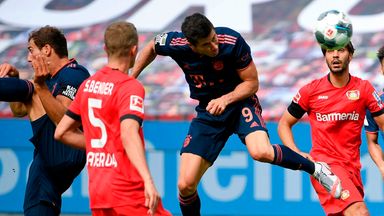 Bayern Munich moved from a goal down to ease past hosts Bayer Leverkusen 4-2 on Saturday putting them firmly on course to win the Bundesliga title with four games remaining. Leverkusen were without talisman Kai Havertz due to injury but threatened to derail Bayern’s title charge when Lucas Alario poked the hosts ahead in nine minutes – the first goal Bayern had conceded away from home in eight hours of Bundesliga football. But Bayern recovered from the early shock and Kingsley Coman curled in the equaliser in the 28th minute before the visitors struck twice in three minutes to turn the game around.

Leon Goretzka completed a sensational passing move in the 42nd minute and Serge Gnabry chipped the ball over keeper Lukas Hradecky on the stroke of halftime.

Bundesliga top scorer Robert Lewandowski headed in Thomas Mueller’s 20th assist of the season this goal is Lewandowski 30th Bundesliga goal of the season and his 44th in all competitions. Sealing Bayern’s ninth straight win before a superb 89th-minute goal from 17-year-old Florian Wirtz cut the deficit for the hosts.

Man of the Match:

•Key forward and 1860 Munich star Kevin Volland is nearing a return from an ankle injury.

•Jonathan Tah has been suffering from a bad back and will be assessed nearer the game.

•Edmond Tapsoba has also caught the eye in defence since arriving from Vitoria Guimaraes.

•Skipper Lars Bender is missing with a foot injury.

•Florian Wirtz, the third youngest player in the history of the Bundesliga, has impressed in his initial forays.

•Paulinho impressed before the Coronavirus crisis, while Charles Aránguiz has just extended his contract. Julian Baumgartlinger has overcome a knee problem, while Kerem Demirbay has been in good form too.

•Leon Bailey and Wendell are also contenders for a starting berth.

•Thiago is nearing a return to the squad after overcoming adductor problems.

•Manuel Neuer will play in goal having extended his contract until 2023.

•Philippe Coutinho and Corentin Tolisso have both had ankle operations and are ruled out. The Brazilian is the likeliest to return before the season is done and dusted.

•Teenage striker Jann-Fiete Arp has recovered from an arm injury but will play for the reserves in the 3rd division, while Niklas Süle is back in light training again after suffering an ACL tear and remains hopeful of playing again this season.

Bayern host Borussia Monchengladbach on Saturday at 5.30pm before Bayer Leverkusen travel to Schalke on Sunday at 5pm. Check out Bundesliga: live stream and TV channels: How to watch every game View Football Live scores