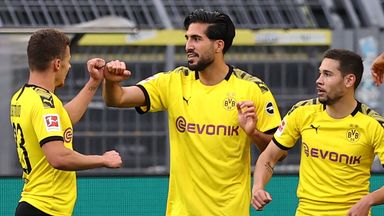 •Expect Head coach Bruno Labbadia to stick with the guts of the side that has racked up three comfortable wins and a good draw against Leipzig since the restart.

•However, in-form Matheus Cunha and Marvin Plattenhardt are both ruled out with concussion.

•Javairô Dilrosun may replace Cunha, while 17-year-old Luca Netz could play at left-back as Maximilian Mittelstädt is also struggling with a thigh injury. His first assignment could be Jadon Sancho…

•Karim Rekik and Niklas Stark have both returned to training from muscle injuries.

•Salomon Kalou has been suspended after filming himself flaunting COVID-19 rules on video.

•Both Marius Wolf and Santiago Ascacibar are struggling with foot injuries.

•Australian international Mathew Leckie is fit following a knee injury, but still has work to do to make the starting XI.
Prediction

•Wunderkind striker Erling Haaland hobbled off with a minor knee injury against Bayern and remains a minor doubt.

•Key defender Mats Hummels is suspended after picking up his fifth yellow against Paderborn. Axel Witsel could slot into midfield, with Emre Can moving back into defence to cover Hummels.

•Mahmoud Dahoud is out for the season after picking up a knee injury in the season defining defeat to Bayern Munich.

•Nico Schulz continues to be troubled by a muscle injury.

•Marco Reus is doing light training following a nagging muscle injury, while Dan-Axel Zagadou has already been ruled out for the rest of the campaign.