The goal gave Leicester a four-point cushion over Manchester United in fifth but they have slipped down into fourth after Chelsea’s narrow 3-2 win against Crystal Palace earlier in the day. Arsenal remain in seventh with 50 points. 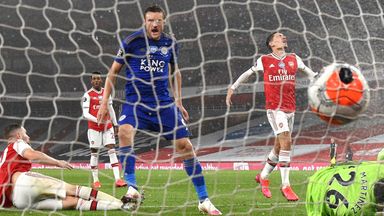 Man of the match

Arsenal made with Cedric Soares and Eddie Nketiah dropping out. Hector Bellerin and Alexandre Lacazette replaced them.
As expected, neither Ben Chilwell or James Maddison were fit for Leicester with the only change coming as Ryan Bennett replaced the left-back

•Leicester City have scored 18 goals in the final 15 minutes of their Premier League games this season, more than any other side.

•At 21 years 38 days, Eddie Nketiah is the youngest Arsenal player to be sent off in the Premier League since Konstantinos Mavropanos, also against Leicester in May 2018 (20y 149d).