Crystal Palace 2-3 Chelsea HighlightsChelsea moved up to third in the Premier League after surviving a Crystal Palace fightback to win 3-2 at Selhurst Park.Frank Lampard’s side raced into a two-goal lead inside half an hour as Olivier Giroud’s opener was added to by the in-form Christian Pulisic just after the drinks break.Wilfried Zaha reduced the deficit with a thunderous strike from 30 yards, but substitute Tammy Abraham struck within six minutes of his introduction to restore Chelsea’s two-goal lead .

Man of the match

Crystal Palace manager Roy Hodgson made two changes. Mamadou Sakho and Jairo Riedewald dropped to the bench after Saturday’s 3-0 defeat at Leicester and are replaced by Scott Dann and Cheikhou Kouyate. 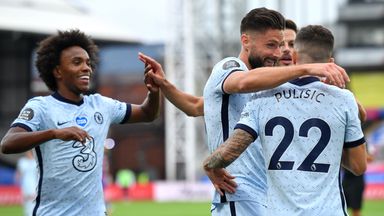 Chelsea were without N’Golo Kante for the Selhurst Park clash, after he sustained a hamstring injury in the victory against Watford. Billy Gilmour took his position in midfield.

Chelsea have now won 132 of their 256 London derbies in the Premier League; their 52 percent win rate is the highest for any side in such matches. 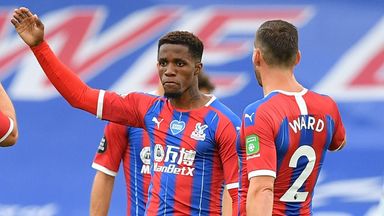 Crystal Palace have lost four consecutive matches for the first time since March 2018 – the fourth game in that run was also against Chelsea.

Frank Lampard is the first English Chelsea boss to achieve a league double over Crystal Palace since Dave Sexton in 1971-72.